Feeding choline during the transition period has been shown to be effective in improving liver function, reducing fatty liver, reducing NEFA and BHB levels, as well as reducing ketosis and energy related disorders (Strangel et al 1998; Lima et al 2012).  In fact some nutritionists in the US now view fatty liver as a symptom of a choline deficiency and in the next publication of the NRC’s Nutrient Requirements of Dairy Cattle, choline is likely to be re-classed as an essential nutrient for the transition cow.

Choline works by providing methyl donors to break up the fat entering the liver around calving into Very Low Density Lipids (VLDL) which can be transported and used around the body as a fuel source.  Choline also improves gene expression of proteins which helps with the secretion of the VLDL from the liver and has a sparing effect on methionine, an essential amino acid which would otherwise be broken down in the manufacture of VLDL until it is used up.  The following graph shows how rumen protected choline can alter liver fat when fed either in the last 3 weeks of the dry period,  the 3 weeks after calving, or from 3 weeks pre to 3 weeks post calving. 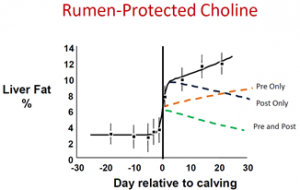 Can any other compounds supply methyl donors for the synthesis of VLDL?

Biotin and niacin (or nicotinamide) are also methyl donors, but neither can help with VLDL production (Grummer 2014).  Biotin is a vitamin involved in several metabolic reactions, but none involving methyl transfer.  There are commercial products which are made up of B Vitamin complexes composed of protected niacin and choline, but the quantity of choline delivered by these is considerable less than the cow’s requirement at calving; and the degree of protection is less.

Kexxtone (monensin) has generated much interest in reducing ketosis by altering the rumen fermentation away from acetate towards propionate, which helps with glucose synthesis.  However, if the liver has been impaired by fatty liver, then the conversion of propionate to glucose is also impaired.  Kexxtone does not aid the synthesis of VLDL and Kexxtone is a prescription only medicine for clinical therapeutic intervention, rather than for blanket treatment of dry cows.  Although no work has been reported using Kexxtone alongside protected choline, the two should complement each other.

How much choline does the cow need?

The cow needs around 1 g of choline per day most of the time.  She can produce 1 g of choline per day naturally, but her requirement around calving increases to around 15 g per day, a level which she cannot meet from natural sources.  Choline can be fed unprotected to cows, however, like all B vitamins it is very rapidly broken down in the rumen.  In one experiment where cows were fed 326 g of unprotected choline, only 2.5 g reached the duodenum (Sharma and Erdman, 1988).  Therefore any choline which is fed has to be protected.

There are four protected choline products on the market, but the degree of protection varies enormously.   After looking at degradation data for the different products, we believe that Reashure offers the best level of protection.  It has more trial data to support it than any of the other protected cholines on the market, and it is endorsed by R. Grummer, one of the leading Professors in the US and one of the authors of the NRC Nutrient Requirements of Dairy Cattle 2001.

The following table shows how one protected choline product breaks down in situ after 5 hours, and how this compares with Reashure. 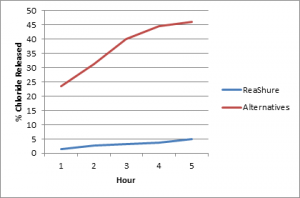 What are the benefits from feeding Reashure rumen protected choline?

In 13 University farm trials where choline was fed pre and post calving for three weeks, the total number of ketosis, sub clinical ketosis (measured by NEFA and BHB levels); retained placentas; metritis; displacements and mastitis cases were reduced by a third.  Generally, transition health was improved, weight loss was reduced and the number of deaths and involuntary culls were also reduced. 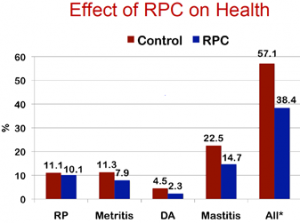 In the 13 University trials referred to, dry matter intakes increased by 6% after calving and milk yields increased by 2.2 litres per cow when protected choline was fed for three weeks pre and post calving. 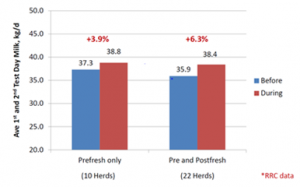 As well as the milk yields and health benefits, choline also appears to improve fertility.  There are lots of references in the literature about how the build up of fat in the liver interferes with fertility and causes:

The University of Missouri trial (Oelrichs et al 2003) showed a statistically significant response. Although the second experiment at the University California (Limes et al 2012) showed a response to feeding Reashure, the response was not significant, but nevertheless shows there is a benefit.

We know transition cow management has a massive effect on cow health, milk yield and fertility.  Anything which improves these factors will have a significant effect on lactation yields and overall profitability.  A 1.5 litre response in milk yield just from feeding a good protected choline in the last three weeks of the dry period is going to increase the lactation yield of the herd by 300-400 litres, therefore it is prudent to feed Reashure, if only for the last 3 weeks of pregnancy, as the health and production benefits far outweigh the £8 it costs to feed one dry cow over a three week period.

Scroll to top
We use cookies on our website to give you the most relevant experience by remembering your preferences and repeat visits. By clicking “Accept All”, you consent to the use of ALL the cookies.
Accept All
Manage consent

This website uses cookies to improve your experience while you navigate through the website. Out of these, the cookies that are categorized as necessary are stored on your browser as they are essential for the working of basic functionalities of the website. We also use third-party cookies that help us analyze and understand how you use this website. These cookies will be stored in your browser only with your consent. You also have the option to opt-out of these cookies. But opting out of some of these cookies may affect your browsing experience.
Necessary Always Enabled
Necessary cookies are absolutely essential for the website to function properly. These cookies ensure basic functionalities and security features of the website, anonymously.
Functional
Functional cookies help to perform certain functionalities like sharing the content of the website on social media platforms, collect feedbacks, and other third-party features.
Performance
Performance cookies are used to understand and analyze the key performance indexes of the website which helps in delivering a better user experience for the visitors.
Analytics
Analytical cookies are used to understand how visitors interact with the website. These cookies help provide information on metrics the number of visitors, bounce rate, traffic source, etc.
Advertisement
Advertisement cookies are used to provide visitors with relevant ads and marketing campaigns. These cookies track visitors across websites and collect information to provide customized ads.
Others
Other uncategorized cookies are those that are being analyzed and have not been classified into a category as yet.
SAVE & ACCEPT